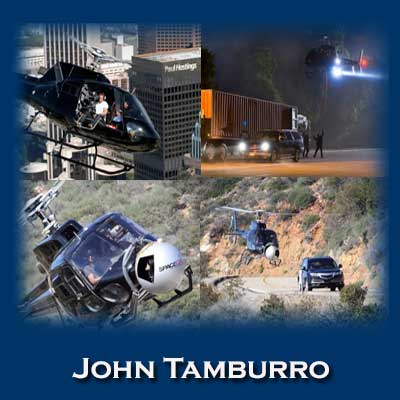 In 1989, John Tamburro began his aviation career flying in the highly congested airspace above Southern California. He began as a flight instructor then flying for local news stations as a pilot reporter, medevac pilot and flew corporate charter but coming from a family of stuntmen and pilots he dedicated his flying to the motion picture industry. He has accumulated over 6500 hours flying in feature films, television and commercials. John has worked with some of the top stunt coordinators and directors in the Motion Picture and Television Industry. He was a 2001 Nominee at the Taurus Stunt Awards for best aerial stunt. He's been a SAG/AFTRA member for 18 years and a proud member of the Motion Picture Pilots Association.

Specializing in the film industry for the past 17 years, John is an expert in aerial cinematography and has a perfect safety record. John is qualified in A-Star, Twin star, Agusta 109, Bell 206 Jet Ranger, Bell 206 Long Ranger and Bell Huey.John started Blackstar Helicopters; Inc. in 2006, a full service motion picture aviation company. John has the experience and knowledge to meet all of your aerial production needs. Whether a rock solid aerial camera shot is needed, or a precision helicopter stunt, John can handle the job while providing the utmost ability, creativity and cost efficiency.