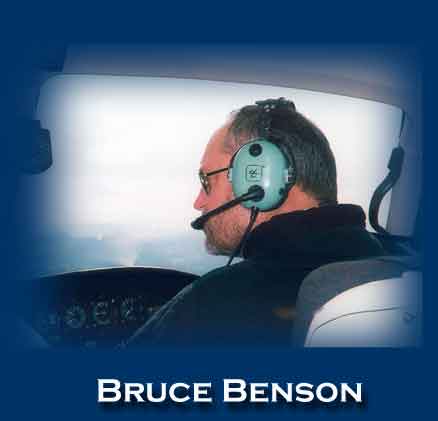 Bruce Benson has been flying helicopters for 26 years in a wide variety of operations. Starting as a ground-crewman and pilot for a helicopter construction company, he soon learned the art of external loads and has been able to use this specialty in the film business on many occasions. Firefighting in the Pacific Northwest added to his ability to operate helicopters under extreme conditions. In addition to being the Company Check Airman for three different companies in three different types of helicopters, Bruce has been the Chief Pilot and Director of Operations for South Coast Helicopters for the past 16 years. Although his piloting duties for South Coast Helicopters keeps him busy, he also coordinates the maintenance, support equipment and management of the company. Production Coordination for the top film pilots in Los Angeles is another of his many skills. Cliff Fleming, Craig Hosking, Rick Shuster utilize Bruce's special ability as a coordinater to control the aerial filming on many Motion Pictures and Television shows. When time permits, Bruce has performed in many shows as either a story ship pilot or a camera ship pilot utilizing SpaceCam, WesCam or Tyler Camera Systems.

Bruce is a member of The Screen Actors Guild